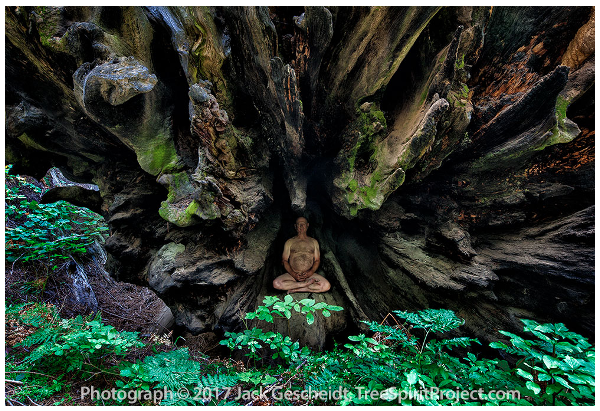 15 Nov You Gotta’ Have Soul – by Tom Robbins

Posted at 09:44h in Uncategorized by Lion Goodman 0 Comments
0 Likes

This is one of my favorite essays ever published.  It originally appeared in Esquire Magazine, in their October 1993 issue.

Mental bungee-jumping may not be your sport of choice, but there’s a cerebral ledge that sooner or later each of us has to leap off.

One day, ready or not, we glance in a mirror, cuddle an infant, attend a funeral, walk in the woods, partake of a substance Nancy Reagan warned us to eschew, chance a liaison, wake in the night with a napalm lobster in our chest, read a message from the pope or the Dalai Lama, get lost in Verdi or lost in the stars – and wind up thinking about our soul.

Yes, the soul. You know what I mean.

Popular culture to the contrary, the soul is not an overweight nightclub singer having an unhappy love affair in Detroit. Nor, on the other hand, is it some pale vapor wafting off a bucket of metaphysical dry ice. Suffering, low-down and funky, seasons the soul, it’s true, but bliss is the yeast that makes it rise. And yet, because the soul is linked to the earth (as opposed to spirit, which is linked to the sky), it steadfastly contradicts those who imagine it a billow of sacred flatulence or a shimmer of personal swamp gas.

Soul is not even that Cracker Jack prize that God and Satan scuffle over after the worms have all licked our bones. That’s why, when we ponder – as, sooner or later, each of us must – what exactly we ought to be doing about our souls, religion is the wrong, if conventional place to turn.

Religion is little more than a transaction in which troubled people trade their souls for temporary and wholly illusionary psychological comfort (the old “give it up in order to save it” routine). Religions lead us to believe the soul is the ultimate family jewel, and, in return for our mindless obedience, they can secure it for us in their vaults, or at least insure it against fire and theft. They are mistaken.

If you need to visualize the soul, think of it as a cross between a wolf howl, a photon, and a dribble of dark molasses.

But what it really is, as near as I can tell, is a packet of information. It’s a program, a piece of hyperspatial software designed explicitly to interface with the Mystery.

Not a mystery, mind you, the Mystery. The one that can never be solved.

To one degree or another, everybody is connected to the Mystery, and everybody secretly yearns to expand the connection. That requires expanding the soul. These things can enlarge the soul: laughter, danger, imagination, meditation, wild nature, passion, compassion, psychedelics, beauty, iconoclasm, and driving around in the rain with the top down. These things can diminish it: fear, bitterness, blandness, trendiness, egotism, violence, corruption, ignorance, grasping, shining, and eating ketchup on cottage cheese.

Data in our psychic program is often nonlinear, nonhierarchical, archaic, alive, and teeming with paradox. Simply booting up is a challenge, if not for no other reason than that most of us find acknowledging the unknowable and monitoring its intrusions upon the familiar and mundane more than a little embarrassing.

But say you’ve inflated your soul to the size of a beach ball and it’s soaking into the Mystery like wine into a mattress. What have you accomplished? Well, long term, you may have prepared yourself for a successful metamorphosis, an almost inconceivable transformation to be precipitated by your death or by some great worldwide eschatological whoopjamboreehoo. You may have. No one can say for sure.

More immediately, by waxing soulful you will have granted yourself the possibility of ecstatic participation in what the ancients considered a divinely animated universe.

And on a day to day basis, folks, it doesn’t get any better than that.